Science marches on across the globe

Job descriptions for researchers haven’t changed too much over the decades. Successful scientists are those who are versed in current literature and techniques, have strong publication records and have proven their ability to solve complex problems. But events in the past several years suggest that researchers need to present a new facet to be successful — a willingness to stand up for science. This year on Earth Day, April 22, scientists around the world did more than stand up. They left their homes and labs to be a part of the March for Science movement.

The March for Science was an unprecedented mass showing of support with more than one million people participating in 600 marches in 66 countries. Events consisted of speakers, science demonstrations, signs and more. The people who showed up, their reasons for doing so and their level of participation were as diverse as the marches themselves.

ARVO members join the March
Buffalo, New York saw 3,500 science supporters march for science. “I marched because I know that the scientific process is the best way to solve the problems that the world faces today,” says Alexandria Trujillo, founding chair of the Buffalo March for Science and ARVO Science Communication Training Fellow. Participants had the opportunity to volunteer to clean up litter in waterways, register as organ donors and receive information on high school STEM programs. The Buffalo march even featured politicians in attendance to show their support for the Great Lakes Restoration Initiative, a federal program to protect and restore the largest system of fresh surface water in the world, which may lose funding under current budget proposals.

Enrique de la Rosa, PhD, at the Biological Research Center in Madrid, Spain, marched to “vindicate science and research as a very relevant factor of social progress.” About 2,000 students, families and interested citizens joined the march and a music festival afterwards. “We were proud and happy to be together supporting science,” says de la Rosa. 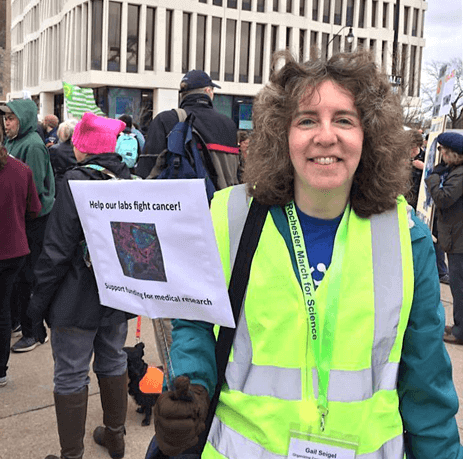 “My biggest reason for marching was to bring attention to funding for medical research,” says Gail Seigel, PhD, FARVO, and co-organizer of the Rochester, New York, March for Science. “We had approximately 2,000 very upbeat people of all ages, and with very clever signs, march downtown toward a science expo,” where numerous science demonstrations were set up.

In Tuebingen, Germany, speeches from a poet, social scientist, “hard” scientist, and the mayor were featured at the end of the march in that city. “The crowd was serious, anxious, angry and somewhat hopeful. Size-wise, the mayor said it was the biggest political gathering he'd seen in the town for a decade (about 500 people),” says Daniel Rathbun, PhD, at Eberhard-Karls-University.

ARVO President Claude Burgoyne, MD, FARVO, along with his wife and other ARVO members, traveled to Washington, D.C., in April to take part in the national March. In a pre-March rally, Burgoyne was invited to speak at the headquarters of the American Association for the Advancement of Science (AAAS). Then, dressed in matching “Eye Support Science” t-shirts and carrying signs submitted to the ARVO March for Science Sign Art Contest, ARVO members joined the thousands of other participants on the National Mall before marching to Capitol Hill.

From a moment to a movement
When a movement is defined by a single event, how do you move forward once the event is over? If you are scientists, the first thing you do is analyze the data.

“According to our RSVP data, only 25% of marchers were scientists,” says Caroline Weinberg, co-chair of the March for Science National Committee, the organization responsible for defining the mission of the March. “Why were they marching? What can we do to keep them energized in continued efforts for science advocacy? We plan to analyze and then share this data, not only to guide our advocacy efforts but those of our partner organizations as well.” 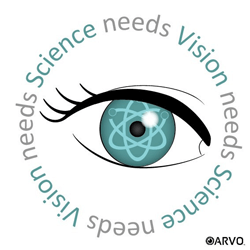 The March for Science partnered with over 270 organizations ranging from global professional societies like ARVO, to single-city science outreach and educational groups. There is significant effort now underway to develop new opportunities for these partners to collaborate. One example is the development of an “expert database” connecting scientists to their local schools and science engagement groups.

Also stemming from the March is a partnership between scientific professional societies. Much like academic disciplines, scientific societies like the AAAS, Society for Neuroscience (SfN) and ARVO did not have sustained interaction with one another but now they do. Following the intense collaboration between societies in the lead up to the March, the leadership of these organizations and their science communication staff members established regularly scheduled communications to collaborate on new ways for societies to speak with a unified voice.

“Though each society focuses on a unique field of research, we all are facing the same challenges, like limited research funding and science skepticism in policymaking,” says Iris Rush, CAE, ARVO executive director. “By coordinating our response to these challenges, the community of scientific societies can better support all of our members.”

Stand strong for science
ARVO has taken the lessons of the March for Science to heart. The theme of the 2018 Annual Meeting in Honolulu, Hawaii, is Stand strong for science: Stand for strong vision science. “One part of ‘standing strong’ is to seek opportunities to articulate the role that science in general, and visual system science in particular, play in our world,” says Burgoyne. “A second part of standing strong is to aggressively seek the resources that are necessary to do our work. I think the current environment tells us we must be prepared to do both.”

Discussions about the importance of science “can no longer be limited to labs or scientific conferences,” says Weinberg. “We hope that the March for Science continues to break down barriers between scientists and their communities, building a more diverse scientific community empowered to promote science in all spheres.”

Efforts like the March for Science ensure that the 21st century will help break science’s stereotypical mold as an isolated undertaking by a dedicated few. Researchers could expect to be called upon again and again to publicly stand up for (and share) the science they love. “We should accept the responsibility for making our work visible and tangible,” says Burgoyne.

As the momentum continues, perhaps research position descriptions or job recruiters will ask applicants to answer a new question: how do you demonstrate your support for science? MW