Inventor. Co-founder. Graduate student. Not many people can claim they’ve held all those titles at the same time. But Lucinda Camras, PhD, chief scientific officer of Camras Vision, certainly can. As a biomedical engineering graduate student at Duke University, she co-founded Camras Vision. Based on a novel idea to develop an external glaucoma shunt originally envisioned with input from her late father, Carl Camras, MD, the company is on the path toward commercialization. Camras shares with ARVONews some insights into her company’s ambitious beginnings and products.

ARVONews: You became an inventor and entrepreneur at a very early age. What led you down that road? 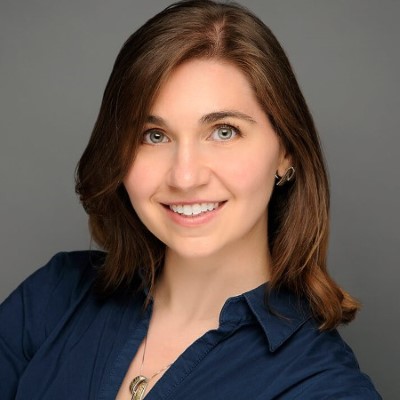 Camras: Before I enrolled in Duke University for my graduate studies in biomedical engineering (BME), I formed a company with my father, Carl Camras, MD. He co-discovered the role of low-dose prostaglandins to reduce pressure in the eye and continued to develop new ideas throughout his career. He inspired me to pursue a similar innovation-driven career, which led to us co-inventing a novel aqueous shunt to treat glaucoma before he died.

ARVONews: How did Camras Vision come about?
Camras: The concept behind the technology my father and I co-invented is that instead of installing a shunt that drains aqueous between tissues which can scar over time about the outlet leading to blockage, why don’t we have the outlet drain to the tear-film surface where scarring could not occur?

My original goal was to use Small Business Innovative Research (SBIR) and Small Business Technology Transfer (STTR) grants from the National Eye Institute (NEI) to fund development of the shunt and use that research as my thesis work at Duke. But because I was trying to work on intellectual property (IP) that wasn’t owned by Duke, I had to pursue it outside of the university. Fortunately, Duke has a great entrepreneur community and I was able to meet my co-founder, a business student, Roberto Alfaro, in Duke’s Program for Entrepreneurs. We re-incorporated as Camras Vision in 2010 and transferred the IP from the original company.

We were eventually able to secure an SBIR grant after we started a collaboration with Duke BME
professor, Bruce Klitzman and Duke ophthalmologists, Rand Allingham and Sanjay Asrani. They represented the academic half of the SBIR/STTR grants, while Camras Vision acted as the business half. This enabled me, with permission from my advisor, to work for the company on a part-time basis until I graduated in 2013.

ARVONews: What role have SBIR grants played in supporting Camras Vision?
Camras: It allowed us to prototype our first devices and work on development. Phase I grants are really to explore feasibility — get a prototype, do some early animal work to get some safety data. Phase II allowed us to do much more on the development side, like the necessary preclinical testing for regulatory approval. It really funded a lot of our development research to get our science to where it is today. I am so grateful that these types of grants are available to move an idea from benchtop to bedside.

ARVONews: Tell us about Camras Vision’s technology and products.
Camras: We are developing an external shunt to control intraocular pressure (IOP) in glaucoma patients, while preventing infections utilizing a micropore filter. The outlet lies on the ocular surface underneath the eyelid. This placement minimizes the foreign body sensation, allows for adjustable intraocular pressure (IOP) and has the potential to alleviate dry eye symptoms.

ARVONews: Where will your product fit into the current glaucoma treatment regimen?
Camras: This is a treatment for moderate to advanced glaucoma. New glaucoma patients will first try medication to lower their IOP. If medication is insufficient to stop the progression of the disease, a more aggressive approach will need to be taken. That’s where our product comes in.

Advantages with external drainage include allowing the doctor to see efficacy beyond an IOP measurement by watching the slow drip of aqueous from the outlet. Furthermore, the doctor has the option to change the rate of drainage non-invasively by accessing the outlet end rather than offering another medication.

ARVONews: What was the biggest challenge for Camras Vision in transitioning from where you were to where you are now?
Camras: Funding and human resources. I was the only scientist/engineer until 2014, when we hired our first employee. At the end of the same year, we found our CEO, Ray Krauss, who has been able to help us secure investor financing rather than just grant funding. We just closed a very successful Series A round of investor funding, which allowed us to expand to a team of seven.

ARVONews: What’s next for Camras Vision?
Camras: In the short term, we’re looking to finalize the design of our first-generation product by the end of the year. That would allow us to start patient trials and the path toward regulatory approval.

ARVONews: With experience leading your own company, do you have any advice for someone thinking of making the leap to becoming an entrepreneur?
Camras: It’s important to know what investors are looking for. The novelty and impact of your technology is not enough. They want to see that you have a business plan and are working with people who have run successful startups previously. Many universities have business schools with students or startup communities that are eager to work with you; there are a lot of opportunities to learn and get connected to business people to help you succeed.

See this Issue
From bench to bedside and back again Mentor and mentee connect to advance OCT angiography application Abstract submissions: Tips from the trenches Women in research: Becoming an entrepreneur New strategies will promote recovery from amblyopia ARVO Foundation: Message from the Chair Life as an ophthalmologist in Cameroon Where are they now? Rewarding young scientists Advocacy and Outreach: International Advocacy Toolkit Advocacy and Outreach: Bringing vision research out of the lab Introducing ARVO’s enhanced online learning system Increasing diversity: A geographic look at ARVO journal authors Around the globe Looking toward the next 50 years