The Beckman-Argyros Award in Vision Research culminates a shared vision between Dr. Arnold O. Beckman and the Honorable George L. Argyros of providing groundbreaking scientists with funding that will enable them to continue making significant transformative breakthroughs in vision research. 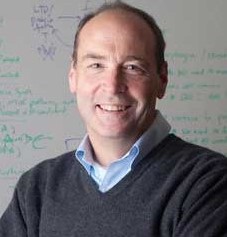 The Arnold and Mabel Beckman Foundation selected Mark F. Bear, PhD, to receive the 2018 award for his research on the fundamental mechanisms of synaptic plasticity in the brain, the synaptic and molecular basis for the effects of monocular deprivation and patch therapy, and the role of experience-dependent synaptic plasticity in learning, memory and neurorehabilitation.

Bear is the Picower Professor of Neuroscience in The Picower Institute for Learning and Memory and the Department of Brain and Cognitive Sciences, Massachusetts Institute of Technology. The Beckman-Argyros Award will allow his lab to investigate novel strategies to promote recovery from amblyopia based on their understanding of synaptic plasticity and metaplasticity.

“Great advances in science occur when insights from one discipline are applied to others,” says Bear. “Studies of ocular dominance plasticity by numerous investigators over the past three decades have greatly advanced the understanding of the molecular underpinnings of brain plasticity, but clinical approaches to amblyopia have changed little since the 80s. Much has been learned since then, and the time is ripe for this knowledge to be translated into new and better treatments for amblyopia.”

Bear’s lab has produced significant discoveries, including the demonstration of a fundamental mechanism by which neural activity triggers a loss of synaptic effectiveness through a process called long-term depression (LTD). This process occurs at synapses throughout the nervous system and has proven to be important for normal refinement of synaptic connections during development, as well as for adult learning and memory storage. LTD mechanisms also have been implicated in the pathophysiology of several brain diseases, ranging from autism to Alzheimer’s disease.

“Importantly in the context of this award, my lab has shown in animal models that the mechanisms revealed by the study of LTD are also responsible for the loss of visual function following monocular deprivation,” Bear explains. “My lab has thus been able to identify the molecular mechanism by which poor quality vision in early life causes amblyopia.”

"Dr. Beckman had an enormous impact on science through his mentorship, entrepreneurship and philanthropy. It is my hope that this award will also be impactful in ophthalmology by drawing attention to the progress that has been made in the field of visual cortical plasticity and the potential to use these advances to develop novel treatments for visual disability based on principles of synaptic plasticity."

- Mark Bear, PhD, Picower Professor of Neuroscience in The Picower Institute for Learning and Memory and the Department of Brain and Cognitive Sciences, Massachusetts Institute of Technology

A second significant discovery by his lab was the demonstration of a phenomenon called metaplasticity. His lab showed that the conditions required to elicit synaptic modification depend on the recent history of neural activity. For example, synaptic potentiation can be promoted by temporarily quieting the activity of postsynaptic neurons. This type of “homeostatic plasticity” is believed to be the mechanism behind patch therapy. Bear and his lab recently showed that temporary silencing of all activity in the retinas by injecting a local anesthetic into the eyes will establish conditions in the cortex that permit a complete recovery from amblyopia in animals.

“In the past decade or so, new approaches have emerged to treat amblyopia using visual training, based in part on principles of synaptic plasticity we and others have elucidated,” he says. “However, the full potential of synaptic plasticity to promote recovery has yet to be realized.” Bear notes that this will be the next area his lab will explore within the few years.

“Dr. Beckman had an enormous impact on science through his mentorship, entrepreneurship and philanthropy,” says Bear. “It is my hope that this award will also be impactful in ophthalmology by drawing attention to the progress that has been made in the field of visual cortical plasticity and the potential to use these advances to develop novel treatments for visual disability based on principles of synaptic plasticity.”

For information on the annual award, visit the Arnold and Mabel Beckman Foundation.

See this Issue
From bench to bedside and back again Camras Vision: A father-daughter invention leads to startup company Mentor and mentee connect to advance OCT angiography application Abstract submissions: Tips from the trenches Women in research: Becoming an entrepreneur ARVO Foundation: Message from the Chair Life as an ophthalmologist in Cameroon Where are they now? Rewarding young scientists Advocacy and Outreach: International Advocacy Toolkit Advocacy and Outreach: Bringing vision research out of the lab Introducing ARVO’s enhanced online learning system Increasing diversity: A geographic look at ARVO journal authors Around the globe Looking toward the next 50 years