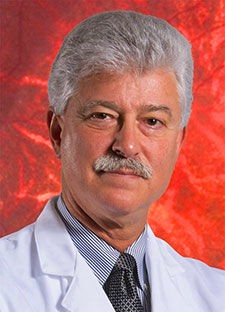 Steven Fliesler, PhD, FARVO, will begin his one-year term as the ARVO president after the 2018 Annual Meeting. Fliesler, vice-chairman and director of research at State University of New York-Buffalo / VA Medical Center-Buffalo, also serves as the ARVO Retinal Cell Biology Section Trustee. He offers a glimpse into his professional background and vision for ARVO during his tenure as president.

What made you choose science as a career?
I’ve been a “science geek” since I was in elementary school. I grew up during the Sputnik and “Race for Space” era, and the emergence of atomic power. The first book I ever checked out from the public library was Our Friend the Atom, by Heinz Haber. I have had a fascination with a variety of different areas of science ever since.

I was originally a chemistry major in college but switched to biochemistry in my senior year at U.C. Berkeley and had the good fortune to work in the lab of Professor Bruce N. Ames and his wife, Giovanna. However, my interest in neurobiology was first sparked when I took an introductory undergraduate course in the subject at Berkeley, taught by Professor Gerald Westheimer. He took an interest in me and wanted me to pursue a PhD in neurobiology, but I told him I was planning on going into biochemistry instead. As I recall, he was not pleased about that, and said, “Biochemistry? What is that? It’s talking biology to chemists and chemistry to biologists — and sense to nobody!”

Subsequently, I pursued a PhD in biochemistry at Rice University. My interest in the biochemistry of the retina came about during my first year in graduate school, when I was asked to give a lecture on the chemistry of vision in a graduate-level neurobiology course. My reading in the area turned up papers that were generated by labs across the street from Rice — at the Cullen Eye Institute/Baylor College of Medicine. As a result, I started having discussions with Gene Anderson and Scott Basinger, among others there, about the visual system. I performed some of the most critical experiments for my thesis in their labs. The rest, as they say, is history.

What have been some of the highlights of your career to date?
First and foremost, I had phenomenal mentors during my formative years in vision science as a postdoctoral fellow at the Cullen Eye Institute, Baylor College of Medicine. Professors Robert E. “Gene” Anderson and Joe G. Hollyfield — both stellar, world-class eye researchers and leaders in the vision research community, as well as former ARVO presidents — were my mentors.

I was very fortunate to get my first tenure-track faculty position as an assistant professor at Bascom Palmer Eye Institute, University of Miami School of Medicine in the mid-1980s. After that, I spent 20 years on faculty at Saint Louis University School of Medicine, where I became tenured and rose up the academic ranks to full professor. In July of 2008, I moved to my present position at the University at Buffalo (UB), The State University of New York, where I hold an endowed chair professorship and am director of research and vice-chair in the Department of Ophthalmology, with secondary appointments in the Department of Biochemistry and the neuroscience program. Concurrently, I am also a research career scientist at the Veterans Administration Western NY Healthcare System (Buffalo VA). In 2014, I was named a “UB Distinguished Professor,” which is the highest academic accolade I’ve received so far in my career.

What research or projects are you currently working on?
For more than three decades, my lab has been focused on animal models of hereditary and acquired human retinal degenerative diseases. Our current studies involve the impact of defective biosynthesis of cholesterol and biogenically related molecules on the structure and function of the retina. We also are studying acoustic blast overpressure injury to the retina and visual system, such as occurs to soldiers in active war zones. One of our projects concerns retinal degeneration in a rat model of Smith-Lemli-Opitz Syndrome, a recessive disorder of cholesterol biosynthesis. We recently showed that we can prevent retinal degeneration in that animal model using a combined dietary cholesterol-antioxidant supplementation regimen (this will appear soon in Scientific Reports). We are currently also working on new genetic mouse models for recessive retinitis pigmentosa.

Please share with the ARVO members how you’ve been involved with the ARVO through the years.
I’ve been an ARVO member since I was a graduate student (>40 years!). I gave my first scientific talk in public at the 1976 ARVO Annual Meeting in Sarasota, Fla. As I recall, I was nervous, and my talk was a disaster. I have served twice (20 years apart) on the ARVO Annual Meeting Program Committee (AMPC) for the RC Section. I served on and then chaired the ARVO Publications Committee and am the liaison to the Board of Trustees for that committee. A few years ago, I was elected to serve as an ARVO Trustee, representing the RC Section. Over this past year I’ve been serving as president-elect, including service on the ARVO Board of Trustees Executive Committee. I’ve also served on a variety of ad hoc committees and working groups for ARVO, was an active contributor to the development of the online “Research essentials” course, am actively engaged in the Global Mentorship Program and have chaired many platform and poster sessions at the Annual Meetings over the years.

What are you looking forward to as ARVO president? What is your vision or hopes for 2018-19?
I am looking forward to helping to promote expansion of the ARVO membership, particularly the recruitment of Members-in-Training, junior faculty, women at all career stages and international members. I also want to advocate for increasing support of eye and vision research, both basic and clinical/translational, to Congress and to tout the major advances and breakthroughs made by members of our community to raise the public’s awareness of the value of these research endeavors to their future health and wellbeing. I have made a major financial commitment to the ARVO Foundation and will urge those of my fellow ARVO members who can afford it to do the same. I am very much looking forward to the 2019 Annual Meeting in Vancouver, Canada, and am hoping to attract another Nobel Prize Laureate to give the Keynote Address at that Meeting.

What specific topic would you like to highlight for our members?
Diversity. I’ve always felt that science transcends all borders: geographic, ethnic, social and religious. My life has been hugely enriched by contact with people from many different countries, cultures and socio-economic and religious backgrounds. This has been a result of being engaged in scientific research, being immersed in a diverse academic environment, and coming to know people from other countries at scientific conferences, such as the ARVO Annual Meetings and the Biennial Meetings of the International Society for Eye Research.

When I was a postdoc, there was a group of us who came from many different places and walks of life, Americans, Asians, Indians, Arabs, as well as Christians, Jews, Muslims, Hindus (probably a few atheists and agnostics, too). To this day, most of us are still in touch with each other, and have remained as friends. Perhaps it was the best time in my life. So, I have a message for our ARVO membership: Embrace diversity. Actively engage people, purposely, who are not like you. Learn from them and about them. It will enrich your life, and quite possibly you will become a better human being because of it. SW/JJ