Leaving his footprint in volunteer service 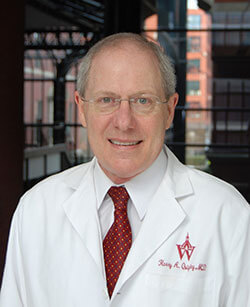 The Joanne G. Angle Award recognizes outstanding leaders who have made significant and continuous contributions to ARVO in support of its mission. Harry A. Quigley, MD, FARVO, the 2018 recipient of the award, has more than shown his commitment to the organization throughout the 38 years he has been a member.

This award is the highest service honor to a volunteer professional bestowed by ARVO, which is exemplified through Quigley’s service as a past ARVO executive vice-president, as well as past editor-in-chief for the Investigative Ophthalmology & Visual Science (IOVS).

Quigley personally knew Joanne Angle, and “receiving this award is very special and a great honor.”

When asked what he viewed as his volunteer service highlight at ARVO, Quigley emphasized his work with IOVS. “At the time, IOVS was ARVO’s only journal. Reviews took almost six months, and the review process was very informal. We were able to streamline the process and create an electronic system to submit reviews in less than six weeks,” he says. “To see IOVS become a top-ranked journal in the category of ophthalmology has been monumental.”

Quigley’s admiration of ARVO is based on watching the organization grow over recent decades in a variety of areas.

He has witnessed the Annual Meeting evolve from a small meeting in Sarasota, Fla., to a highly-anticipated international event of more than 11,000 clinician-scientists and researchers sharing the latest breakthroughs in vision research.

“It is invaluable to me to have been a part of the change of a very section-specific meeting to introducing symposium and subject categorization,” Quigley says. “I began my volunteer service as a member of the Annual Meeting Program Committee (AMPC). This committee provides a unique experience of putting your footprint on the Annual Meeting. You can have a firsthand glimpse of the thoughtful processes put into place to create engaging symposiums and sessions.”

Whether it be the AMPC or any other committee, Quigley believes choosing to serve is the best way to participate in ARVO. “You will be personally enriched by volunteering. As a Member-in-Training or as anyone trying to make yourself known, there are a number of ways you can get involved with ARVO. My personal philosophy on volunteerism is simple, everyone should find a way to do it.” KM

During the ARVO 2018 Annual Meeting, in Honolulu, Hawaii, attendees will have the opportunity to attend the lectures of the 2018 ARVO Achievement Award recipients.

Reza Dana, MSc, MPH, MD, FARVO, will be honored with the Friedenwald Award. His contributions to the mechanisms of antigen-presenting cell activation and mobilization, leukocyte-lymphatic interactions, autoimmunity and alloimmunity have had a profound influence on our understanding of and therapeutic strategies for immune-based conditions, such as transplant rejection, pathological angiogenesis and chronic dry eye disease.

The research of Felipe Medeiros, MD, which has been characterized by innovative and impactful contributions to methods for diagnosing glaucoma and detecting its progression, will be recognized with the Cogan Award.